The performance is a tribute paid to Charlie Chaplin, whose work became an inspiration of the spectacle. It is also an amusing reflection on the fate of an artist in the world destroying personality and degrading art. 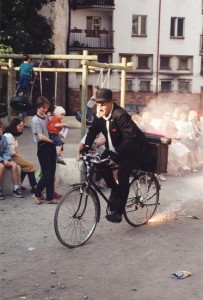 “… though I’ve visited a good part of the world and I’ve seen many performances, I have never seen anything like “Charlie the Dishwasher” … multidimensional, actual, amusing, strong from the professional point of view …”

Posted in Performences on 15 August 2015
No Comments »