HISTORY OF WROCLAW, LOWER SILESIA AND POLAND IN A FUNNY WAY

A series of interactive outdoor spectacles, showing the history of Wroclaw, Lower Silesia and Poland from its beginnings in the convention of the silent cinema, accompanied by funny comments. The main idea of the event is to show the extraordinary history of Wroclaw and Poland to a wide, international audience.

THE PIASTS, part I 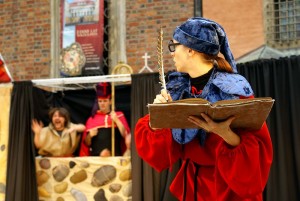 It is the first part of the spectacle and it shows the founding of the settlement by the Czech prince Vratislav; establishing Wroclaw as the Roman Catholic bishopric by Otton III and Boleslaw   Chrobry in the year 1000; the takeover and return of the city by the Czechs; the failed siege of the city by the German king Henry V and the victory of king Krzywousty in the battle against the Germans;, growing of the settlement during the governments of Peter Wlost and his conflict with Wladyslaw the Outcast (Władysław Wygnaniec); the governments of the 6 Henries (starting with Henry I the Bearded (Henryk Brodaty) and his wife Holy Hedwig (Święta Jadwiga), finishing on Henry IV the Good (henryk Dobry) who died without any descendant and left the throne to Jan Luxembourg, the king of Czech). In this part it’s also important to show the patron of Wroclaw- Blessed Czeslaw and the variable history of the coexistence with the Jewish nation.

The language of the “silent cinema comedy” and the funny comments (in Polish or English) make the whole event so spectacular and universal. The spectacle doesn’t have any language or age borders. The initiative educates and builds up a local and national patriotism through fun.

DURING THE CHECH, part II 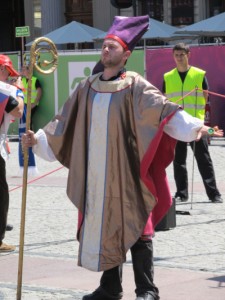 It is the second part of the show, which shows the late Middle Ages and early renaissance on the example of Lower Silesia, when the region becomes one of the richest in middle-east Europe. The number of entertainment venues increases, and so does the willing of paying the taxes, there appears a conflict between the church and the government, the burghers revolt against the rulers and it’s strict suppression, the funny conflict of the monks from different monasteries about which one of them is older; the beer war, pogroms against Jews (every time when there were needed some guilty), burning the heretics at the stakes; building up amazing pieces of architecture.

The main element of the scenery is a mechanized construction of screens with animated pictures, showing the historical scenes in a traditional, but also funny way. What makes the whole play amazing is : the stunning staging, variety of characters, interactive happenings, engaging the spectators in the play, using many forms (live acting, puppets, animated paintings, props, silent cinema convention…), music from the époque and the surprising changes of places, actions and time.

Posted in Performences on 15 August 2015
No Comments »